Inside the author’s head: Unruly characters, word addiction, and the writing process

Welcome to this journey into the world of M.Q. Barber! By reading this sentence, you have signed a binding agreement not to sue for damages caused by exploring the Lovecraftian horrors of an author’s mental landscape.*

*Just kidding. Obviously, by the time you exit, you’ll be so insane that you won’t remember why you visited in the first place.

First, let me thank Cd Brennan for tagging me in the Writing Process Blog Hop. She’s a fellow Lyrical/Kensington author with a talent for sweet romance and beautiful travel narrative. I recently read Watershed, the first book in her Love Where You Roam series, and I’m dying to see the new rugby series she’s working on.

Since she revealed her writing secrets last week, it’s my turn this week. Buckle up — we’re going inside the author’s head.

What am I working on?

This week I have three books on my plate.

Healing the Wounds (Neighborly Affection #3), the sequel to Playing the Game and Crossing the Lines, is in the last stages of editing with my publisher. We’re down to the nitty-gritty of stray hyphens and commas. The story picks up with Henry, Alice, and Jay the day after their unsettling experience in Crossing the Lines (Neighborly Affection #2). The book is set for publication June 2, 2014, but reviewers can look for it on NetGalley sooner.

Because the Neighborly Affection books are written from Alice’s point of view, and because Henry demanded the chance to tell a story of his own, I submitted a new manuscript to my publisher yesterday. Becoming His Master (A Neighborly Affection Prequel) is the story of how Henry met Jay. I’ll know in a few weeks if the publisher decides to accept it. Until then, I’ll be chewing my nails and pacing the floor.

Finally, I’m smoothing out the rough spots in an as-yet-untitled novel about a woman moving on after a bad divorce and a man eager to settle down and start a family. It’s a standalone romance completely unrelated to the Neighborly Affection books. I know, I was surprised, too, but when the characters show up, I just take dictation. With any luck, I’ll have this one polished and submitted to my publisher in April.

How does my work differ from others of my genre? 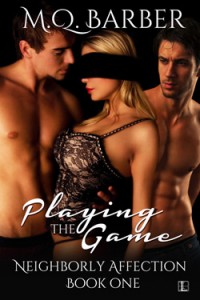 I didn’t set out to write something “different,” but following where Henry, Alice, and Jay led took me to a place that seems to have surprised some readers.

First, the sex isn’t for the sake of having X amount of sex in Y pages. The eroticism grows out of the characters’ psychological journeys. It’s meaningful sex, whether to explore the characters’ desires or expand their horizons, cement relationships or introduce conflicts. You’ll know when nothing significant to the story happens in a sex scene, because it’ll be a fade-to-black one. If it doesn’t matter in the grand scheme of things, I don’t write it.

Second, Henry is a dominant alpha male who doesn’t spend his time shoving his partners around and calling them derogatory names. He’s not a broken billionaire playboy who gets his kicks abusing a less-assertive partner. He’s a serious, caring man who recognizes and respects the trust it takes for Alice and Jay to submit to him. He is, in short, the kind of dominant you’d want to meet on your first time out at a munch or a play party.

Third, Alice isn’t a reluctant player, a doormat, or a naive virgin. She’s an independent woman who assesses her options and makes a decision to explore her kinks with trusted friends. When Henry gives her a pass to his playground, she wants to take all of the toys for a test drive.

Why do I write what I do?

I write what I do because the characters matter to me. All of their hopes and fears, their little victories, their painful setbacks — the characters trust me with their hearts and souls, and I do my best to share them with readers.

For all of you who’ve read the books and left a review saying the characters feel real, or you understand them, or you could be them: Thank you. You’re the reason I write.

How does my writing process work? 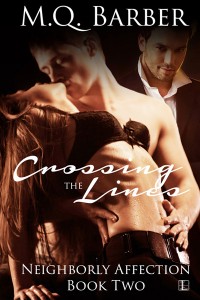 Editing is a process. Writing is an addiction.

I spent too many years trying to impose a process on writing. I tried being a plotter. I tried outlines. I tried putting one word in front of the other and plodding along at a snail’s pace, stymied and frustrated whenever I encountered a sentence I couldn’t finish perfectly the first time.

And then I let it go.

I let all of the rules about writing drift to the back of my head. Now I only follow one rule: Go where the characters take me. Sometimes those places are unexpected. Hell, sometimes they aren’t even in the same book. But when I trust the characters to show me what they want me to see, I end up with a more authentic journey — and I don’t get stuck along the way.

Is it rough? You bet it is. That’s why they call them rough drafts. If I read through the first draft and end with the thought, yes, this is how it happened, then I can move on to the process part of the cycle. In a sense, the first draft is my outline. It’s just extremely detailed and written out of order according to the characters’ whims.

I’m not afraid to rip apart the words and choose new ones in the editing process. That’s part of the wisdom. By changing how I see writing and editing, I’ve freed myself to be both the chaotic, messy writer addicted to jotting ideas on post-it notes anywhere and everywhere at all hours of the day and night AND the by-the-book editor tweaking word choice and sentence structure and paragraph length to shape the effect the story has.

Being chaotic terrified me. But giving myself permission to be imperfect in a first draft has created a depth and truth in my characters that I couldn’t have found any other way.

I’ve tagged three talented authors to follow me, so please check them out below and visit their sites on Monday, March 31, for a peek at their writing processes. I’m listing them in alphabetical order because I get so much disorganized chaos from the characters in my head that I can’t tolerate it elsewhere. 😉

Sophia Jones lives in the Arizona desert with her husband and an assortment of other furry critters. She is a voracious reader of many genres, though most often it’s a love story in her hand. Coffee addict. Dog lover. Yoga noob. Conjurer of sweet and steamy romances. She’d love for you to stop by and say hello.

While some say truth is stranger than fiction, Deb Julienne’s experience runs more along the lines of a slap-stick comedy. She believes when life tosses you lemons the only thing to do is to turn it into Limoncello.

​After writing for almost 20 years, she’s about to be an overnight success. Her life, like her comedies, has been one big fat romantic comedy…of errors. It’s not a matter of “if” it can go wrong, but how bad when it does happen, and make no mistake…it will. Survival with a sense of humor is the goal.

Joking aside, Deb’s dream of being published will come true with the release of her first book, SEX, LIES, AND BEAUTY AIDES, coming out March 2014.

As a long time member of both Romance Writers of America (RWA) and her local RWA Chapter, the Sacramento Valley Roses, she fills the hours she’s not writing romantic comedy and romantic suspense with her day job at a Silicon Valley Corporation, playing in the kitchen concocting her award-winning jams, jellies, preserves, and sauces (with alcohol of course).

​Born and raised in San Jose, California, she now resides in the Tahoe National Forest Basin, her own little bit of heaven on Earth, with her husband of 33 years, their three sons and one daughter, and two very precocious grand kids.

I’m happily married with two children. I love to cook, hike, bike, and hang with my girlfriends. I’m an avid romance reader and enjoy all types of romance novels including historical, contemporary, paranormal, and erotica.

Oh and did I mention I have my own consulting business? I obviously had a couple of hours left in the day so I began writing romance. I wanted to bring readers hot, sexy romances that are brought to life with compelling characters. Who knew writing romance could be as fun as reading it!