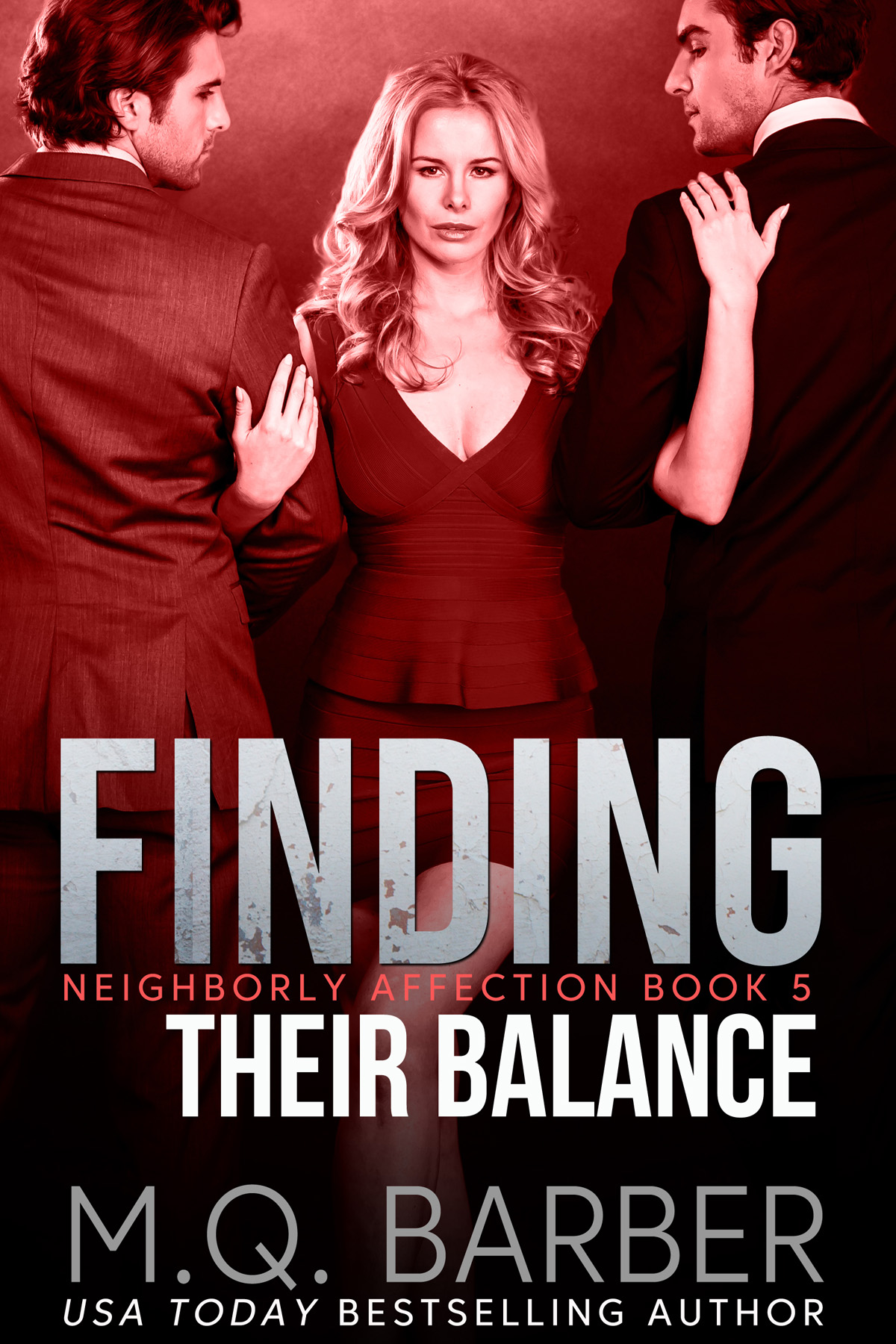 Henry, Alice, and Jay are adapting to life as a poly triad. For all the bedroom fun, there are still practical matters to sort out, too, as the members of the trio define their roles in the relationship. And then there’s the problem of Jay’s abusive former partner, who just won’t go away.

Getting to the one-year mark is difficult enough for two lovers. With three in the mix, every day brings a fresh challenge for Henry, Alice, and Jay. Between Alice’s headstrong insistence on pushing her sexual limits and Jay’s need to confront an abusive former lover, Henry has his hands full keeping both of his partners safe and happy. If his balancing act fails, the trio’s future will come tumbling down. But amid the struggles and risks of their unconventional lifestyle, the three form a union that brings each of them to the edge of something new—a love that could slip through their fingers if they don’t hold on tight. 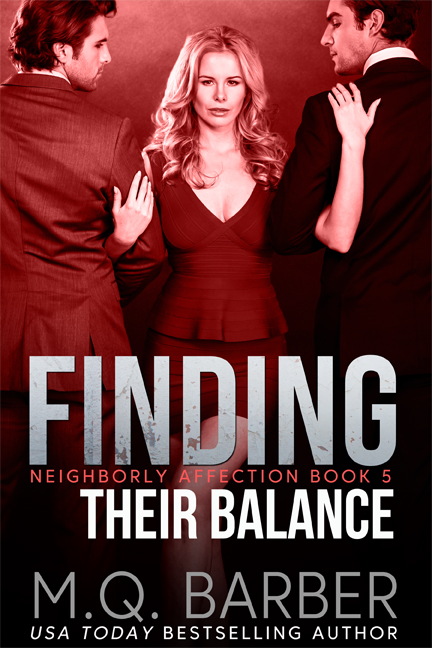 Henry prepares Alice and Jay for a new torment.

Alice abandoned work at noon Wednesday for tea at a fetish club. Her coworkers wished her luck at the dentist’s office.

When she arrived home, Henry stood surveying a freshly showered Jay seated on the end of the bed. Dark hair damp, body nude, he enticed more than the promise of a dainty meal.

Hip hugging the doorframe, she fiddled with her blouse’s top button. “Are we stripping down and skipping tea?”

Henry beckoned. Obedience earned her a commanding kiss and flushed her with heat.

Jay’s eager whimper swirled around them.

“Don’t tempt me.” Caressing her throat, Henry slipped her first button free. “But do remove your clothes. The lovely summer dress is yours.”

The dress hung over the closet door. Deep cream with green spiraling up the left side. Ivy? Knee-length, sleeveless, a slight A-line drape with a high neckline. Modest. Dark brown pants and a cream-colored shirt bracketed Jay on the bed. If his outfit included a tie, five bucks said he’d match her green ivy.

“Hey, stud.” Working her blouse open, she bent and kissed Jay’s cheek. “You leaving room in the waistline for all the tea-party snacks we’ll be eating?”

“Fancy little cakes?” With a sly grin, Jay coaxed out her giggle.

“Absolutely.” She shrugged off her top. “Do little cakes come in other kinds?”

Loosing a mocking growl, Henry tossed boxers into Jay’s lap. “Behave, my dears, or you’ll not eat any treats at tea.”

Sock-footed, Jay stood and flowed into the shorts. Pants next, open and clinging to his hips while he swung the shirt around and slipped his arms in. God, fucking with that hasty, half-dressed thrill—

“Distracted?” Clasping her waist, Henry jolted her from open appreciation. “You’ve forgotten to undress.” Fingers dangerous and nimble, he unhooked the hidden fastener and lowered the zipper. “Or perhaps you wanted me to take charge of you?” Pushed past her hips, her pants slumped to the floor.

Jay fumbled with his shirt buttons.

Henry traced the top of her panties. “Alas, you’ve worn underthings light enough for your dress, and we haven’t time to indulge without reason.”

Reason enough to never again wear a pale peach bra and panty set. If she’d worn the black ones, he’d be stripping them off her now.

Henry brought her the dress, unzipped the back, and helped her step in. As he lifted her hair from her shoulders, a few wheat-blond strands escaped.

“I’ve sandals for you beside the bed, Alice.” Henry kissed her neck and patted her back before turning to Jay. “Formal for afternoon tea, I know, my boy.”

He flipped up Jay’s collar and looped the tie, fingers deft and sure as he formed the knot. Whatever Jay knew, she lacked a framework for what constituted formal enough—or too formal—for afternoon tea.

“Better overdressed than underdressed.” Henry straightened the tie. Kissing Jay, he displayed more than a little possessiveness. Not for her benefit, but for Jay’s. He deserved a calming reminder that every inch of him belonged to Henry. Tension melted from his lanky frame as he allowed Henry control. “And seeing you so attired pleases me.”

Their desire tugged as a steady warmth in her chest rather than a thumping beat between her thighs. She ducked, hiding her smile as she closed the clasps on her sandals.

Henry herded them to the car. Ordering Jay to the front, he handed her into the back. The positioning suggested a deliberate attempt to prevent Jay from dwelling on the night they’d come home in tears. Being at the club without Henry, even not for play, would give him fidgets. Henry trusted her to take good care of Jay. Fuck up, and she’d burn in the self-ignited fires of coulda-shoulda hell.

After pulling the car into traffic, Henry settled his free hand on Jay’s knee and stayed. “I’d like this afternoon to be an enjoyable experience for you both.” The rearview mirror granted him authority over her, too, with his flickering gaze. “Mingling with other submissives outside of a dominant’s influence will be an excellent opportunity to bond over shared hopes and attain deeper understanding.”

“Not all of them will be like you, nor will all of their relationships be like yours with me.” Henry kneaded Jay’s thigh and patted his knee. The constant comfort might seep inside and bolster his courage. “But you are likely to find commonalities, and those will be lovely places to start. So long as you make an effort to be social, I will be very proud.” Pausing in stopped traffic to allow a car to pull out from a side street, he captured her gaze. “If you have difficulty, look to Emma for guidance.”

Troublesome enough to reconcile Emma as Henry’s friend—one who held uncountable secrets she’d never learn. No fucking way would she be bound to obey someone else outside Henry’s presence. “Is she in charge of us?” 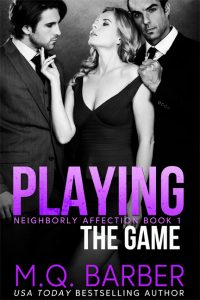 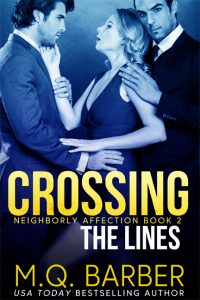 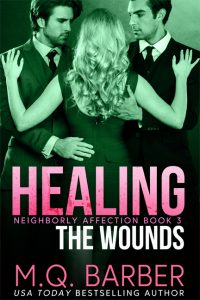 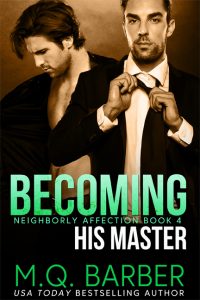 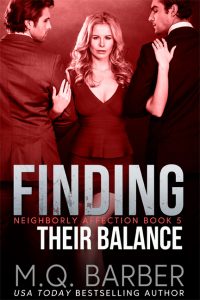 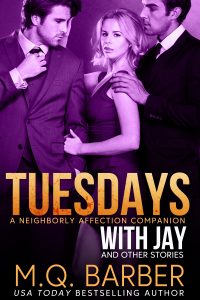 Praise for Finding Their Balance

These stories are beautifully written with a great sense of understanding and sympathy for the human condition. That another can see beneath the skin to the needs, insecurities and heart of you, makes for a continuing tale of love and adventure.

I’ve adored this series from the start, and it just keeps getting better. This isn’t my go-to genre by any means, which makes the depths of emotion and exploration of the psychology behind the games Dom Henry and co-subs Alice and Jay play even more appealing. Steam and boundary-pushing with heart and a deep, abiding respect and love? Always a winning combination in romance!

This unconventional love story touches your heart, tickles your funny bone, and revs your engine.

Barber has a lyrical quality to her writing. Each detail perfectly executed to create a world in which the reader can get lost. Every step of the way you feel the forward motion of the characters. Not only do you see growth of the individual, but also within the relationships. Each book in the series sees new challenges for Henry, Jay, and Alice and each book sees growth from the experiences of those challenges and those experiences seamlessly move the reader through the next book and the next set of challenges.

I haven’t read the other 4 YET. I highly recommend this as a stand alone but definitely could feel where I was missing the inside story. The author does a great job of filling in necessary information without oversharing. … Lyrical writing. When Henry speaks it is poetry. It adds to the magic in their complicated relationship. This story is not about punishment. Safety, trust and love form the foundations that each partner builds on to serve one another.