New release: Tuesdays with Jay and Other Stories 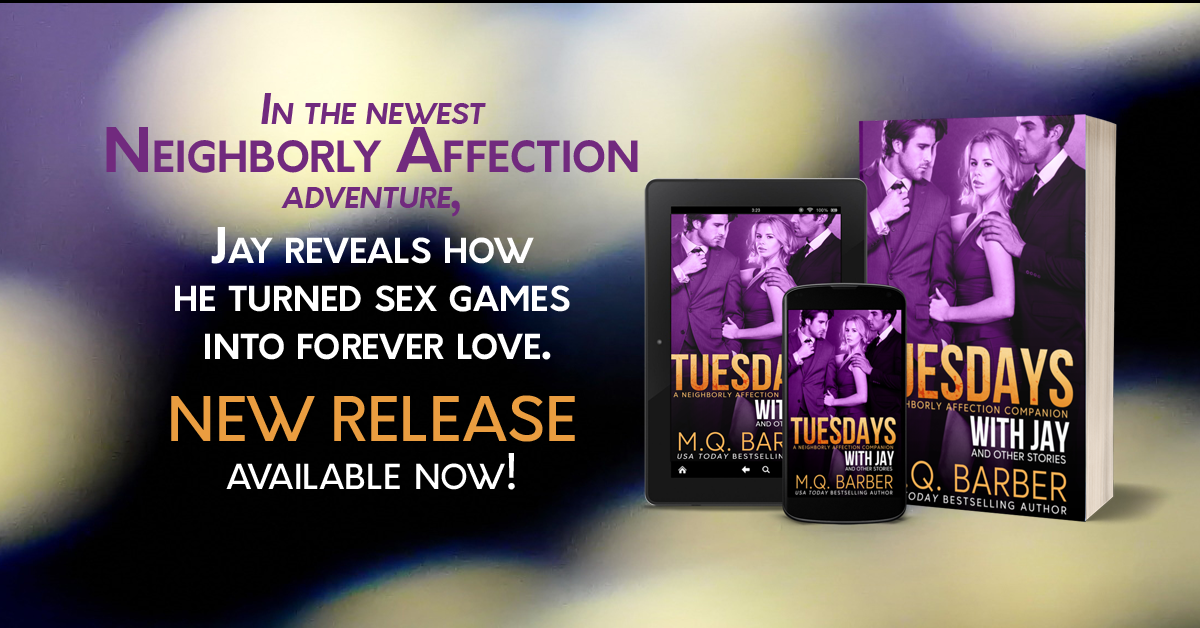 A note for those who haven’t read the series: Tuesdays with Jay is not the place to start, unless you’re reading it in tandem with Playing the Game and Crossing the Lines. Jay’s storytelling complements Alice’s recounting of the developing relationship among Henry, Alice, and Jay as they move from part-time D/s play to a love that will last the rest of their lives.

But don’t take my word for it–here’s what readers are saying about Tuesdays with Jay and Other Stories and the Neighborly Affection series overall. (Please ignore my happy tears–release days are a bit emotional!)

“If you haven’t read the series, you should! It is hands-down the best written ménage book series. … Ms. Barber has a beautiful literary voice which brings each character’s personality so vividly to life that they feel very realistic.” –sherry1, BookBub

“Jay is the embodiment of goodness, purity, and love all wrapped up in a super sexy submissive package. … It is impossible to read this without it hitting you squarely in the feels. Like, ALL the feels. Jay, Henry, and Alice form the trio at the heart of the Neighborly Affection series, and their relationship — artfully chronicled through Jay’s eyes in this book — beautifully demonstrates the transformative power of love without boundaries.” –Jammie Bebout, Goodreads

Check out more reviews of Tuesdays with Jay and Other Stories at BookBub and Goodreads! Thank you so much to everyone who has taken or will take the time to write a review. It’s the best thing you can do for an indie author, and it means more to me than I can ever express.

Tuesdays with Jay and Other Stories includes these stories:

Get it at your favorite retailer!

About Tuesdays with Jay

Read the first story, “Rush Job,” now. And enjoy your time with Jay!