Finding Their Balance on the road 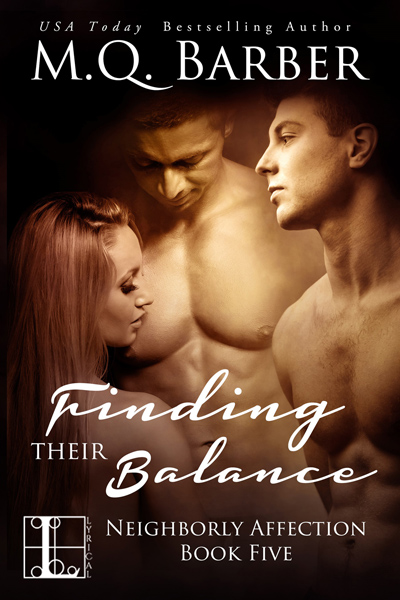 Henry, Alice, and Jay are having a fantastic and fun first week in readers’ hands with Finding Their Balance (Neighborly Affection #5)!

Special thanks go to Jen at Bookaholics for letting them play in her backyard for a bit. Check out their character interview talking about relationships, personal quirks and Jay’s inability to sit still here.

Jen also has a review of Finding Their Balance: “I admit that I tend to be skeptical about these kinds of relationships, so when I read books about them, my enjoyment level tends to flip-flop because I’ve got that voice in my head telling me that the story is too fantastical and that relationships like threesomes don’t really work. And then I met Henry Webb, Jay Kress, and Alice Colvin, and while their love story has evolved into more than Neighborly Affection, this is one ménage involving three people who made me believe that love can truly exist among them.” — Read the whole 5+ star review on Dog-Eared Daydreams

Shelly at Red Hot Books loves the wider peek at the Neighborly Affection universe in Finding Their Balance: “I really thought I was getting to know Henry and how he ticked, but while his relationship with Jay and Alice are his main focus it turns out Henry is a very good friend to have. He’s a nice guy. … Emma’s been a present force in the last few books but there’s so much more to her than I could ever have imagined.” — Read the whole A-rated review on Red Hot Books

The lovely folks at Crystal’s Many Reviewers put up a double review of Finding Their Balance! Here’s a snippet from Angela’s review: “Barber packs so much into this installment in the Neighborly Affection series that it’s hard to believe it all happened in one book. Impressively, it all flows from one scene to the next that I was swept along with the trio, without feeling overwhelmed by all that occurs or the pace at which it does.” — Read both reviews on Crystal’s Many Reviewers

Jude at Geeky Reading devoured Finding Their Balance: “Another fantastic book in this series. I have eaten up each book so far, and still re-read them. This one will be added to the list.” — Read the whole 4.5-star review on Geeky Reading

Thanks also to fellow romance author Gemma Brocato for letting the trio visit to celebrate their release!

Oh! One more thing — if you missed Henry’s recent interview at RLF blog, here he is talking about Jay at the beginning of their relationship.

Getting to the one-year mark is hard enough in a relationship between two lovers. For three, just getting through the day can be half the battle.

Between Alice’s headstrong insistence on pushing her sexual limits and Jay’s need to confront an abusive former lover, Henry has his hands full keeping both of his partners safe and happy.

But despite all the challenges — and unexpected dangers that lurk in their hedonistic world — the three have formed a union that brings each of them to the edge of something new. Something they may not be able to hold on to…

← Release day! Finding Their Balance is out in the wild Giveaway: An Accidental Gentleman (standalone HEA) →