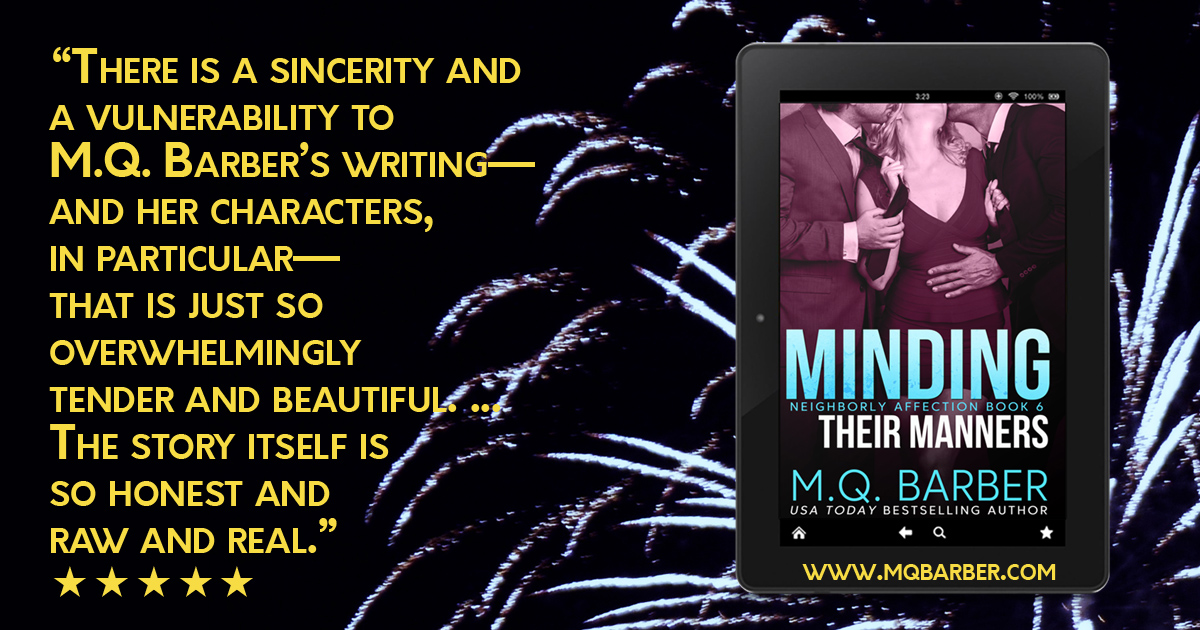 Henry, Alice, and Jay have returned with Minding Their Manners: Neighborly Affection Book 6!

It feels incredible to say those words. For a long time, going through some rough life stuff (haven’t we all), I wasn’t sure I would ever be able to get this book out into the world.

If you’ve been with the series for a while, you’ve probably been waiting more than five years for Minding Their Manners—ever since Finding Their Balance: Neighborly Affection Book 5 came out in March 2016. What can I say but thank you for your patience?

For me, the release of Minding Their Manners marks ten years since Henry, Alice, and Jay first started sharing their story with me. Some of the events in this novel (no spoilers) were jotted down not long after that, while I was still writing Playing the Game: Neighborly Affection Book 1.

I’ve always known where the trio wanted to go; it’s just been a longer road than I expected to get there. And we’re not quite done yet.

While Minding Their Manners is going out into the world today, the trio is whispering in my ear for one more adventure: Binding Their Hearts: Neighborly Affection Book 7. We’re hard at work on that one now.

Places to purchase, wishlist, and review

Facing their families is turning out to be the trio’s toughest test.

Life should be grand for Henry, Alice, and Jay. They’ve defeated the doubts that kept them apart and embraced a relationship that suits all three of them.

But the arrival of Alice’s sister threatens to upend their cozy routine. Skepticism and accusations erupt in a visit bristling with tension as the sisters tear open old wounds.

Even worse, Jay’s springing a new idea on his partners: it’s time to come out to his family. His decision might destroy them all—but Henry’s hunger for Jay’s public embrace makes it almost worth the risk.

Henry, Alice, and Jay must redefine who they are to each other and what they want for their future—together or apart. Can they trust in their love enough to survive the consequences?

(I’ll hush now and let you go read the book. I hope you enjoy spending time with Henry, Alice, and Jay in their latest adventure. I know I did.)