Crossing the Lines ARCs and cover are here!

What a difference a year makes. Playing the Game is out and finding an audience among readers of intelligent erotica. Next week will see the release of a FREE Neighborly Affection short story, “Three-Way Tie,” in the First Frost anthology from Lyrical. Crossing the Lines is ready to hit reviewers’ inboxes and will go on sale March 3, 2014. And I just signed the contract with Lyrical for Healing the Wounds (Neighborly Affection #3), which will be released in July 2014 — exactly one year after Playing the Game.

The me of a year ago would never have believed it possible. To say I’m feeling thankful in this Thanksgiving season is a severe understatement. Thank you to my family, critique partner, fellow authors, and editor for believing. Thank you to the readers who have given the book a chance, to those who have posted reviews, to those who have emailed or tweeted to tell me they enjoyed Playing the Game, and to those who are still discovering it every day. I am so grateful to all of you.

Now, let me get out of the way and introduce Crossing the Lines (Neighborly Affection #2): 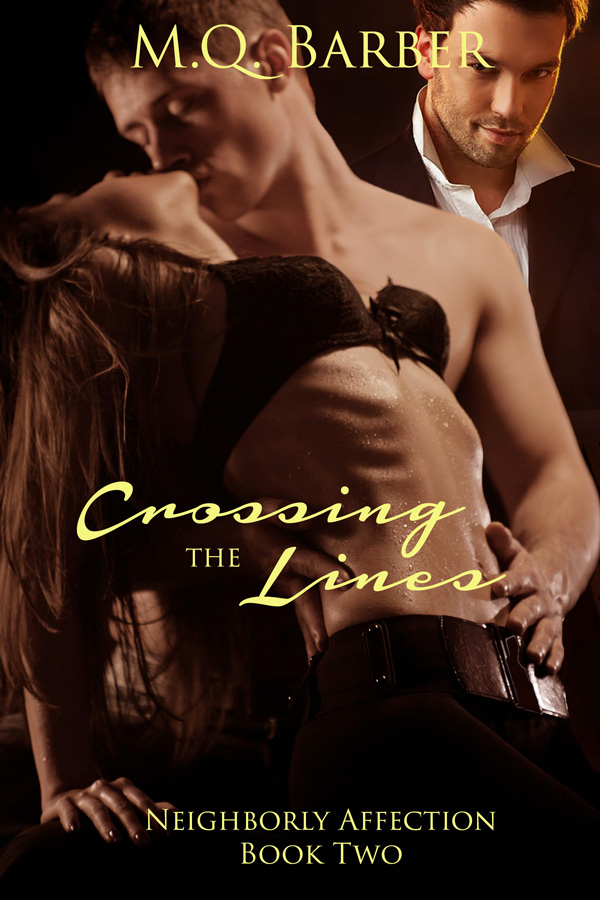 A safeword won’t save her from love.

After six months of cavorting in her neighbors’ bed, Alice admits signing the contract to be Henry’s sexual submissive is the best decision she’s ever made. He delivers on his promise to give her sexual satisfaction. But submitting to his dominance alongside his long-term lover shows her the sharp line between sex and love. Henry loves goofy, eager-to-please Jay. Neither man has promised to love her.

Hiding her feelings grows harder every night she spends with them. As they struggle with wounds old and new, her emotional turmoil threatens to shred their arrangement. Is it time to bow out before they show her the door? Or can a triangle be the shape of true love?

Note to readers and book bloggers: If you’re interested in receiving a review copy of Playing the Game, Crossing the Lines or First Frost and you’re able to post a review on any of the following: your blog, your Goodreads, Facebook or G+ pages, and/or online retailers like Amazon and B&N, please email me at mqb@mqbarber.com. Tell me which book you’d like, whether you need an epub or mobi (Kindle) file, and where you’ll be posting your review. If you’d also like to interview me or the characters for your blog, let me know. Henry, Alice, and Jay love field trips.

Note to newsletter subscribers: You’ll be getting a new excerpt from Crossing the Lines in your inboxes on Tuesday, Nov. 12. For anyone who isn’t signed up, it’s as easy as entering your email address in the field at the bottom of the page or checking the box to subscribe when you leave a comment below. I guarantee you won’t hear from me more than once a month, and you’ll get early excerpts, extra scenes, and flash fiction.
← Day trip: Henry, Alice, and Jay conduct their own interview Spend the week with me at Sizzle and Sass →