I can’t even express how excited the release of Crossing the Lines (Neighborly Affection #2) makes me. The second book in the series takes us below the surface and wades into the fears and flaws in the relationship Henry, Jay, and Alice share. 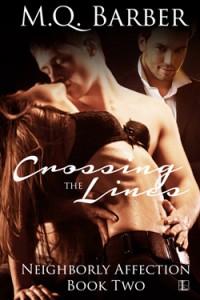 Today, I want to point you all to Red Hot Books, where Shelly has posted her review of Crossing the Lines and an interview with me about the series.

In her review, Shelly really digs into the balancing act going on as Henry, Jay, and Alice sort out their feelings and figure out how they can move their relationship forward.

She tries to be this badass chick who doesn’t depend on anyone, but as Barber chips away at her personality, more and more is revealed that hints at her beliefs and choices.

On getting to know Jay:

Jay quickly became my favorite character in this story. His background was delved into the most and I got to find out more not only about his past relationship with Henry, but some of what his pre-Henry days were like.

On the mysteries of Henry:

Henry is still Henry – sweet talking, chivalrous, fastidiously polite and probably the one most in need of the lifestyle the three share.

Hop over to Red Hot Books to read the whole review and the interview, and pick up Crossing the Lines at your favorite online retailer — Amazon, B&N, iTunes.

← 2 reivews, 1 interview, and buckets of excitement Getting inside Crossing the Lines →