Alice is trying out a new skill with Henry in this excerpt from Crossing the Lines (Neighborly Affection #2). 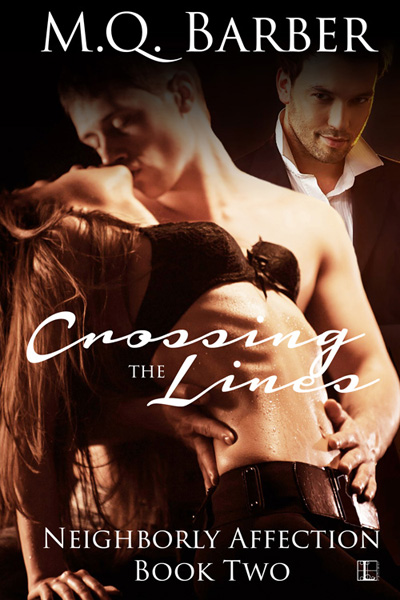 She’d never asked something of Henry when she couldn’t chalk it up to orgasm-deprived begging as he teased her body. This was asking when the answer wasn’t guaranteed, when he’d barely touched her and didn’t seem inclined to, despite Jay’s assertion.

“Can we…would you…take me now? While Jay’s awake to enjoy it?” Good. Make it about Jay, and Henry would let her comfort him and herself.

The tape on Jay’s arm had peeled up at the edge. She pressed a finger on the corner and smoothed it. Up. Down. Silence. The waiting blasted her ribs like an industrial freezer. Her nerves thrummed as she craned her neck.

“I sense a conspiracy here.” He started unbuttoning his shirt from the top. “It’s a wonder I imagine myself in control of anything at all.”

She rolled onto her legs in Jay’s favored pose. Kneeling near the center of the bed, she bowed her head toward Henry. Imitation. Jay ought to be flattered.

She meant to show perfect submission, naive innocence and a soft voice to match, but her stare refused to leave Henry’s chest. Lust spilled over, filling her with the need to have his body bared to her. The flat nipples waiting beneath the edges of his shirt. The scratchy-soft patch of hair where she rested her cheek when he cradled her to his chest. “You’re in control of me now, Henry.”

He paused at the final button. White folds of fabric sloped toward the last point of tension, a rushing river leading to his waist. He spread the tails wide and shrugged free. The shirt fluttered to the floor. Bare flesh. All hers tonight.

“Lie on your side, Alice, facing Jay.” His commanding voice made her tremble. He, too, felt eager. Engaged. Present in the moment.

Obedience was a gift she could offer him. One she owed without question during these hours, as much as she was able. She sank into the sheets, lying on her side, giving up her beautiful view of Henry’s chest.

The rustle of his clothing tempted her as he undressed. The bed dipped behind her. His body warmed her naked back, and his head nestled behind hers on a single pillow. Heaven.

“Tell me your safeword, Alice.”

Read the whole story in Crossing the Lines (Neighborly Affection #2), available now at Amazon, B&N, iTunes and other online retailers.