Henry claims Jay as his submissive in training in this excerpt from Becoming His Master (Neighborly Affection #4). 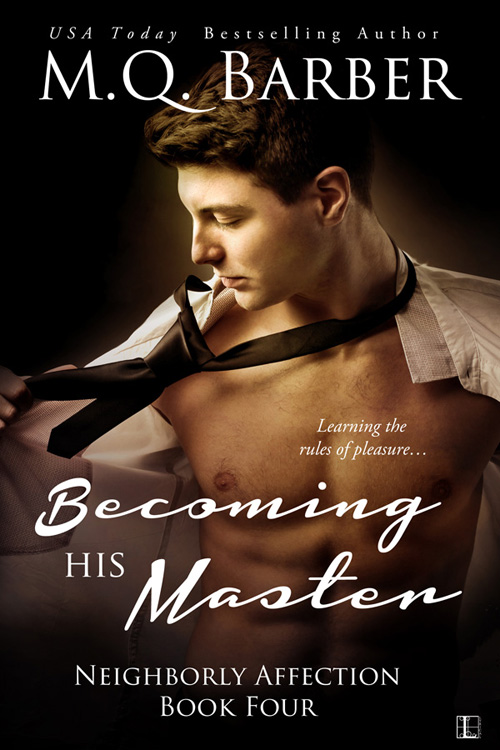 With trembling fingers, Jay accepted his new ribbon and fastened it. His breathing quickened. The motion highlighted his slender abdomen and firm chest, a fact that hadn’t gone unnoticed by the submissives behind the desk. Their admiring, envious glances might have been for his attractiveness or his luck in receiving a coveted exclusive arrangement.

Dangerous. Jay couldn’t be trusted alone. He lacked judgment and the appropriate level of awareness for his own safety.

“None.” If Henry meant to teach him properly, he couldn’t leave anything to chance. “If I’m present when he arrives, he’s to be sent to me. If I am not, he’s to be detained at the desk and I’m to be called immediately at the number on file.”

“Jay.” Calling his name in a gentle undertone, Emma tipped her head. Mahogany spirals cascaded from her upswept bun. “Do you agree to Master Henry’s terms, Jay?”

Good. Jay ought to understand he had the right to refuse. He wouldn’t, of course. His sharp nod came as no surprise.

“Wonderful.” Emma moved her fingers over the keyboard. “He’s all yours, Master Henry.”

All his. A quivering, abused pup who deserved gentleness but required firmness. Strict control.

If all went well, he’d be able to show him he needn’t accept humiliation and degradation from any master or mistress who would have him. He would teach him to recognize and respect the gift he offered. To be selective in his choices.

“Thank you, Emma.” He turned to his newest acquisition.

Head bowed, Jay revealed exquisite bone structure. His high cheekbones and steep, narrow nose acquired a glow from the lighting. Angelic and sweet to all appearances, a sculpture finished with delicate tools. But inside lay the raw, unformed nature pushing its way out.

Read the whole story in Becoming His Master (Neighborly Affection #4), available now at Amazon, B&N, iTunes and other retailers.