Some days I thought August would never arrive! Her Shirtless Gentleman is finally going out into the world, and I hope you’ll have a grand time with Rob and Nora.

They’re a steady and playful, sexy and tender, flawed and striving pair, because those are the kind of people I find most interesting: Good people who are trying. And while Rob and Nora (and the Gentleman series in general) move in a very different world from the one Henry, Alice, and Jay inhabit in the Neighborly Affection books, they aren’t so different at their core. If they all sat down over drinks, I think they’d understand each other quite well.

Her Shirtless Gentleman is out Aug. 4, so for these two weeks or so, I’ll be updating this post with links to fun excerpts, thoughtful reviews, and my own babbling about the inspiration behind the book. Starting Aug. 4, you’ll also be able to enter the giveaway below and maybe win yourself some spending money — because we all know the book habit is a voracious beast. 😉 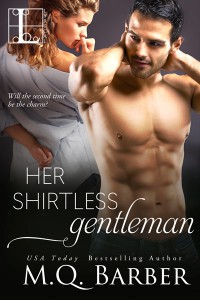 A Man for Working Days: Here’s a look at how Rob developed into the man he is with a little help from Shakespeare. (Host: Just Contemporary Romance)

Mistakes? I’ve Made a Few…: The road that leads Nora to Rob is a bumpy one, but the destination is exactly where she wants to be. (Host: Mary Gramlich)

No Thanks, I Don’t Need to Be Rescued: Can a man still be a hero if his heroine rescues herself? What does it mean to be equal partners? (Host: Shelley K Wall)

For God’s Sake, Just Talk it Out: This is what happens when characters use common sense and trust instead of flying into a tizzy over every little thing. (Host: Romance Divas)

A Series Begins With Strong Roots and Broad Branches: A peek at personal longings and the ideas that inspire me to follow where the characters lead. (Host: Fresh Fiction)

Rob and Nora meet for lunch, and Nora has a confession for her gentleman. Read here.

Rob gives Nora a sweet taste of the man he is. Read at Readers Entertainment, Book Lover, or with a recipe at Karen’s Killer Fixin’s.

Rob and Nora confess what they’re looking for in a relationship. Read at USA Today’s HEA blog.

What happens after that first kiss? Read at Romance at Random.

Early reviews on Goodreads from some very sweet and thoughtful people. If you’re not sure whether Rob and Nora are for you, the reviewers’ commentary will give you a much better sense of that than I ever could. 🙂

“The story had those sweet moments that make you want to sigh in happiness but it also had the steam I’ve come to expect from the author. I loved reading about Nora’s personal journey to self-belief and the journey she and Rob were on as they made their way to their much deserved happily-ever-after.” — Bookaholics Not-So-Anonymous (now Dog-Eared Daydreams)

“I was hooked from the beginning by a level-headed career woman I could relate to and a hero who finds her attractive for all the right reasons.” — You Gotta Read Reviews

“[Rob]’s going to have her. But he’s nice about it and he builds her confidence in a positive way. I really enjoyed that part. Also, the part where he’s hot, possessive, protective and helps her find her own power and strength. Yes, he’s that amazing.” — Battery Operated Book Blog

“The writing in this was smart, fun, and oh yes, sexy…” — Red Hot Books

“These two are on the same page: they both want a person to love them, to be honest with, to explore life and pleasure together. And those moments are sweet, steamy and honest.  A wonderful start to a new series, and a perfect read to reclaim your belief in relationships.” — I am, Indeed

“When I picked up this book I was expecting to read about a woman who goes on a sexual adventure after her divorce. Instead I got a beautiful story about learning to love yourself again after being through a relationship that destroys your self-esteem.” — Love Bites and Silk Ties

“While we’re watching them become a couple, we also get to watch Nora become a strong woman, confident in herself and her sexuality. We get to watch Rob who is finally allowed to focus his love, his protectiveness, and his strength on that one special woman. So we get to watch them grow individually and together.” — Sheri B., via Goodreads

“This was an engaging light read, well thought out and beautifully executed.” — Swoon Worthy Books

“Wasn’t sure at first about reading a book about a divorced woman, but the book got me right from the start.” — Life, Books, and More

“Her Shirtless Gentleman is a fun, sweet, sexy, quick read with awesome characters and a great storyline! … I loved the fact it was sexy without being only sex.” — Bound by Books Book Review

“Watching Rob’s support of Nora as she regained the strength and independence she had buried for so long was a treat… A mix of wooing and woo that ticked all the boxes for an emotional, sexy and satisfying read.” — Nerdy Dirty & Flirty

Special thanks to everyone who was able to pre-order Her Shirtless Gentleman, because you fabulous folks make me look good in front of my publisher. 😉  For anyone who wasn’t able to tie up their book-habit money in advance (been there before!) or was on the fence about giving Rob and Nora a try (no worries, Henry will understand!) and wants to snag a copy now, here’s where to look:

Thanks so much for taking this journey with me. I love hearing from readers — feel free to comment below, drop me a note via Facebook, or send me an email if you want to share your thoughts. 🙂